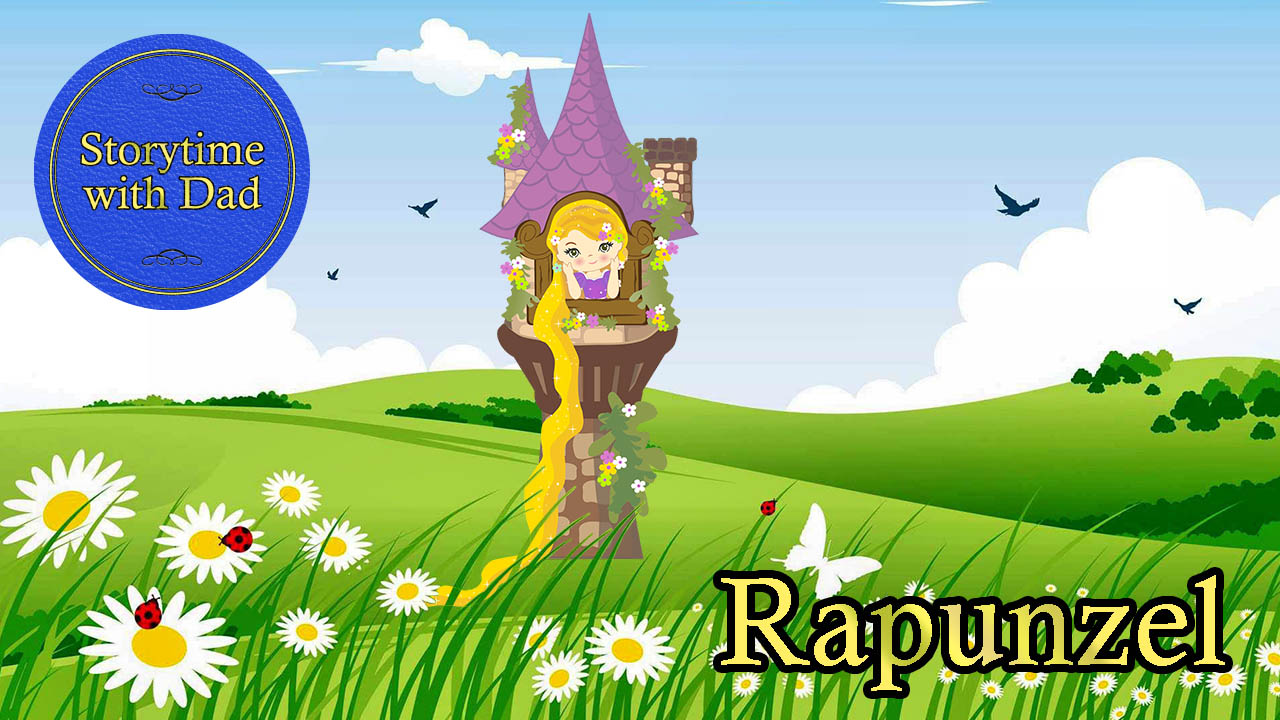 Welcome to Storytime with Dad. Today we will be reading Rapunzel.

Long, long ago, a man and his wife lived in a cottage that overlooked the garden belonging to a witch. They would sit at their open window at the end of the day, and breathe and all the perfumes of the flowers gaze at the pretty colors, and say how lucky they were to live there. “If only we had a child,” they said, “There would be nothing left in the world to wish for.”

Her husband was puzzled. “Are you crazy?” he said. “I’d have to climb into the witch’s garden to get it!” But it seemed that his wife was crazy with longing for the rapunzel flower.

“Please, please,” she begged, “Give me that rapunzel or I’ll die!”

At last, he gave in to her. When night came, he scaled the wall like a cat, plucked a handful of rapunzel, and was back over the wall in less time than it takes an owl to blink. His wife made a salad of it and ate it at once.

“Was it good?” her husband smiled.

“Yes,” she said. “I’d like some more! I must have some more! Please, please!” And she begged and pleaded for three whole days, until he knew they would both go crazy unless he fetched her some. So, when night came, he scaled the wall again, quick as a mouse. He was just stooping down with his hands around a bright bunch of the plant when a shadow fell across him.

“What are you doing in my garden?” The man froze as if he had been turned to stone. There was the witch watching him, and her eyes were as green and deep as a bog pod.

“I was taking some rapunzel for my sick wife,” he said. He was afraid for his life and there was no point in pretending anything else. He still had the flowers clutched in his fist, and besides, the witch could read his secret thoughts.

“…Your wife is not sick,” smiled the witch. “She longs for rapunzel because of the child she is bearing!”

“What!?” said the man, and his heart swelled with joy!

“Of course, you must take her some. Take as much as you want.”

“Thank you. Thank you!” The man fell on his knees in gratitude.

The witch’s smile had turned to frost, “And when your daughter is born, give her to me and I will be her mother.”

The man could hear his wife’s voice begging him to bring her the flowers at once. Frightened out of his wits, bewildered, and excited all at once, he promised to do as the witch said. Then he gathered up as much rapunzel as he could and climbed the wall to his own small yard. And just as the witch had told him, a daughter was born to the man and his wife on the first day of Spring. They could think of only one name for her, and that was Rapunzel.

She hardly had time to open her eyes and gaze around the world before the witch was at their door.

“What do you want?” said the man and his wife with fear in their hearts.

“My child.” said the which. “I told you, I am her mother now!” and they never saw a Rapunzel again.

The witch loved her so much that she kept her all to herself. She wouldn’t even let her play in the garden in case the man and the woman watched her from their window and tried to take her back. By the time Rapunzel was 12 years old, she was so beautiful that the witch could hardly take her eyes off her.

“Look at your hair!” she marveled. “It’s like a river of gold the way it tumbles down your back. I’ve never seen anything like it.” She fingered her own crackly hair and then brushed Rapunzel’s until it shone like the sun. But the witch was worried in case anybody saw a Rapunzel and wanted her for themselves. She didn’t want to share her with anybody. So she put her in a tower and sealed up the door behind her, and at the end of every day she brought food for her.

There was no way into the tower now, of course. So what happened was this: the witch would call out “Rapunzel, Rapunzel, let down your hair.” Then Rapunzel would lean out of her window at the top of the tower and wind her hair around two hooks and lower it and down. It would flow down and down like a shimmering golden waterfall all the way to the ground. The witch would tuck up her skirts and shimmy up Rapunzel’s hair as if it were a ladder, and when she wanted to go home to bed, she would swing back down again.

There wasn’t much for Rapunzel to do, shut up there in her high tower, except to dream and sing. She had a lovely voice, and one day a young prince was riding through the forest and he heard her voice and fell in love with it. He had to know who it belonged to. He found the tower, but there was no door to it! He walked around and around looking up hopelessly at its high smooth walls.

“Nobody could be in there, surely,” he thought. And yet, there was the voice as sweet as a skylark. He was just about to ride away, sure now that he must be imagining it, when he saw the witch coming through the forest towards the tower, and he hid among the bushes.

“Rapunzel, Rapunzel, let down your hair,” he heard her say. The singing stopped, down came the curtain of glorious hair, and up the witch climbed. Now, he had no doubt that somebody was hidden in the tower, and he couldn’t wait to see who it was.

As soon as the witch had climbed down again and disappeared into the forest, the prince approached the tower. It was almost night by now and he was a little afraid he might be under a spell of some sort. He had such longing to see who was sealed in the tower.

“Rapunzel, Rapunzel, let down your hair,” he called, and sure enough the shower of hair came flowing down! The prince flung himself up. Imagine his surprise when he found himself facing a young girl who was so beautiful in the moonlight that she stole his heart away! And imagine her surprise when she was expecting a green-eyed spiky witch, to see a young man smiling at her!

Rapunzel had never seen a man before. She had no idea what a prince was. She had never heard of love, but she was very happy the prince stayed with her, until the dawn like pearls was creeping across the sky. And when he finally left her, she knew that she couldn’t live without him. He came the next night, and the next, and the next, and then he asked her if she would be his wife. She said yes, even though she had no idea what a wife was.

“But this is no good, you know,” he said. “I have a fine palace just over the hill. That’s where we should be.” So they thought up a wonderful plan for Rapunzel’s escape. Every time the prince came to see her he brought her some silk, and all day long when she was without him, she built a ladder for herself. It gave her something to do while she was singing, and each rung she wove brought her a step nearer to freedom. And all would have been well if she hadn’t forgotten herself completely one day.

This is what happened: the witch climbed up at dusk, as usual, and Rapunzel said carelessly, “I always know when it’s you coming. You’re so much heavier than…” She went pale and put her hand to her mouth, but the witch slapped it away quick as a fly!

“Than the prince who comes to see me!” Rapunzel confessed.

“You wicked girl, you deceived me!” In a rage that was as wild as a thunderstorm, the witch pulled back Rapunzel’s wonderful hair and cut it off! She forced her down the silk ladder that would have taken her into the prince’s arms, and sent her out into the wilderness – to live or die, she no longer cared which.

That night, the prince came to take Rapunzel home with him.

“Rapunzel, Rapunzel, let down your hair,” he called, and this time the silk ladder came down. Up he climbed, but when he reached the tower, it was not Rapunzel’s eyes that he looked into, but the deep, bog pod green of the witch’s!

“Ha! Your bird has flown away!” She cackled. “So, fly after her!” She cut the silk ladder – snip! – and down he tumbled. Down, and down, and would have broken his neck if he hadn’t been saved by a brier bush. The thorns pierced his eyes and blinded him, and with the witch’s laughter ringing in his ears the prince wandered away into a darkness that was deeper than night itself. He wandered for many days, and many weeks, and many months, eating nuts and berries that he found on the wayside. And a year and a day later, he came into the same part of the wilderness as Rapunzel.

She recognized him at once and ran to him and put her arms around him, and her tears washed his eyes and he could see again! He took her home to his palace and they announced their wedding. And the prince and Rapunzel lived happily ever after.

As for the witch. Well, as far as I know, she is still trapped in that tower. The end.

What a wicked woman that witch was! You know, the thing I like most about fairy tales is that the good people always win. It really is a lot like real life, and the stories are supposed to model real life for us so we can learn things.

Looking back at Rapunzel, we can absolutely see that the witch gets what she deserves. She tries to take advantage of the mom and dad – obviously a child is much more important than some flowers to eat, but have you ever super hungry? There’s no telling what we’ll do sometimes when we really want something badly – and we make some pretty bad decisions when we’re hungry. This is how the witch takes advantage of them.

Throughout the story, we learn that keeping our treasures away from the world high in a tower, like she did with Rapunzel, just isn’t possible. The world around us is going to find some way into our lives and is going to seek out the things that we treasure. In the end, though, that was actually the best thing that could have happened. Rapunzel met someone new and was able to build her own life.

Take this lesson to heart, don’t hide yourself away, and don’t over protect yourself from things that scare you. Be brave and strong, and face the things that you are afraid of. If you do this, then maybe they’ll turn out not to be scary, but wonderful if you are courageous enough to look at them.

I hope you liked the story, please drop me a review, or email feedback to: hello@storytimewithdad.com. Or tweet me @DadStorytime