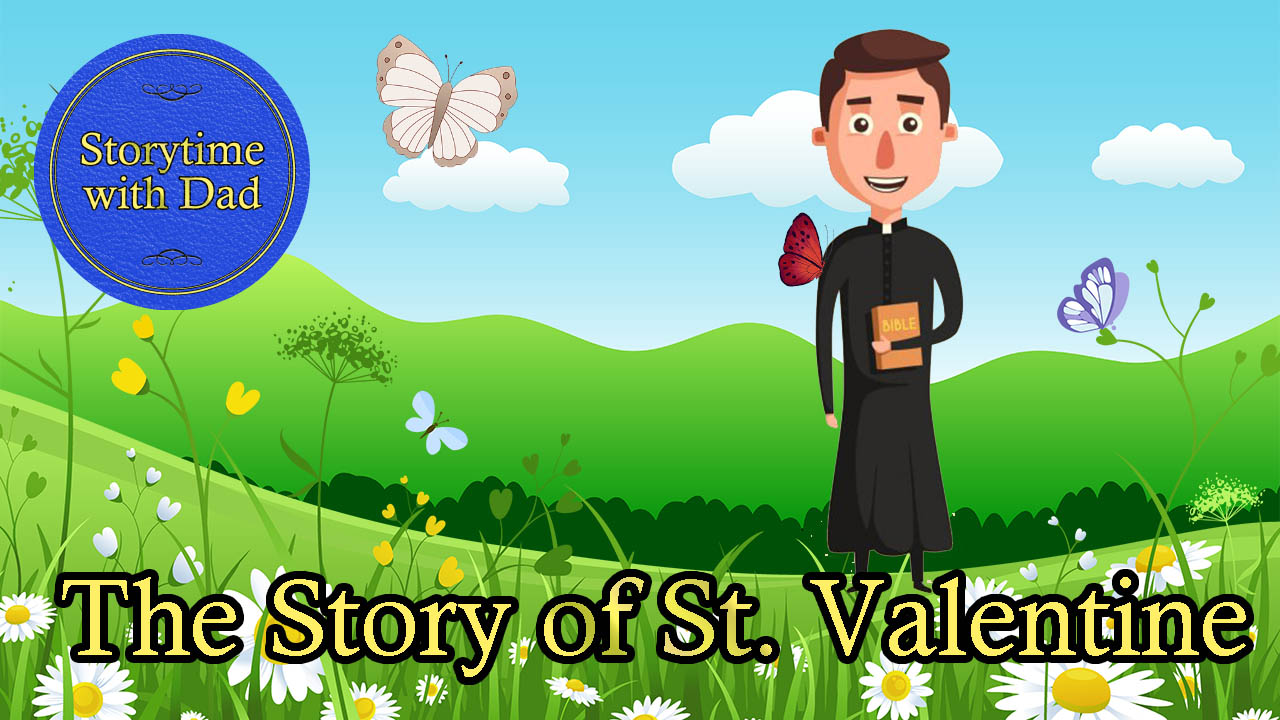 Welcome to Storytime with Dad. Today we will be reading, The Story of St. Valentine.

Many many years ago, in old Rome there was a king named Claudius. Claudius was a very cruel king. He did not like to see people happy and was always fighting with other kingdoms.

In the same city, there lived a kind priest named Valentine. He loved all things and was often seen out in his gardens, tending the plants and enjoying the butterflies that fluttered about the pretty petals of the flowers. Father Valentine made sure to take very good care of his garden, because knew that the butterflies needed the flowers.

Another thing that made Father Valentine very happy was to see young people in love. Love was the best thing that could happen to two people, and when couples came to him and asked him to marry them, it was a time for great celebration.

Now, Claudius did not like to see people get married. Since he was always fighting other kingdoms, he needed soldiers. But, soldiers do not like to leave their wives and children when they go out to fight. Young soldiers also did not want to leave their sweethearts behind. So this idea of love was not something the king liked. So he, being the mean man that he was, banned all marriages and made it illegal for anyone to become engaged.

Father Valentine was very upset by this. He disagree with the king and decided to perform weddings in secret. Young couples in love would sneak through his garden, past the lovely flowers and butterflies and in through the back door where they would be married.

Eventually, Claudius heard that Father Valentine was still performing marriages and ordered his guards to go and arrest the priest. The good Father was taken and thrown into the dungeon!

While he was in the dungeon, Father Valentine learned that the jail-keeper’s daughter was blind and he sent for her. He touched her eyes and she was immediately granted her sight. It was a miracle!

You can probably guess that the terrible king did not like Valentine. So, King Claudius finally ordered that Father Valentine be put to death!

On February 14, the year 270, Valentine sent a letter to the jail-keepers daughter, whom he had fallen in love with. He signed the letter “From your Valentine”. This is why we ask people to “be our Valentine” on Valentine’s Day.

As Father Valentine was being buried, a huge cloud of red and white butterflies appeared and circled over the people at his funeral. They fluttered here and there, and eventually landed upon Father Valentine’s coffin. The people looked at the pattern that the butterflies had made when they landed and saw that it was shaped like a big heart. And that is why we use the heart as a symbol of love today.

That’s a pretty wild story isn’t it? And it’s real! It really happened about 1800 years ago.

And Valentine was right, loving one another is the most important thing that we can do – the king was wrong even though Valentine was punished for what he did. So, this Valentine’s Day I hope you will let someone you love know that you love them. We all need a reminder that we’re loved sometimes, and Valentine’s Day is a great day to show someone some love.

Thanks for listening! We’ll see you again next time.