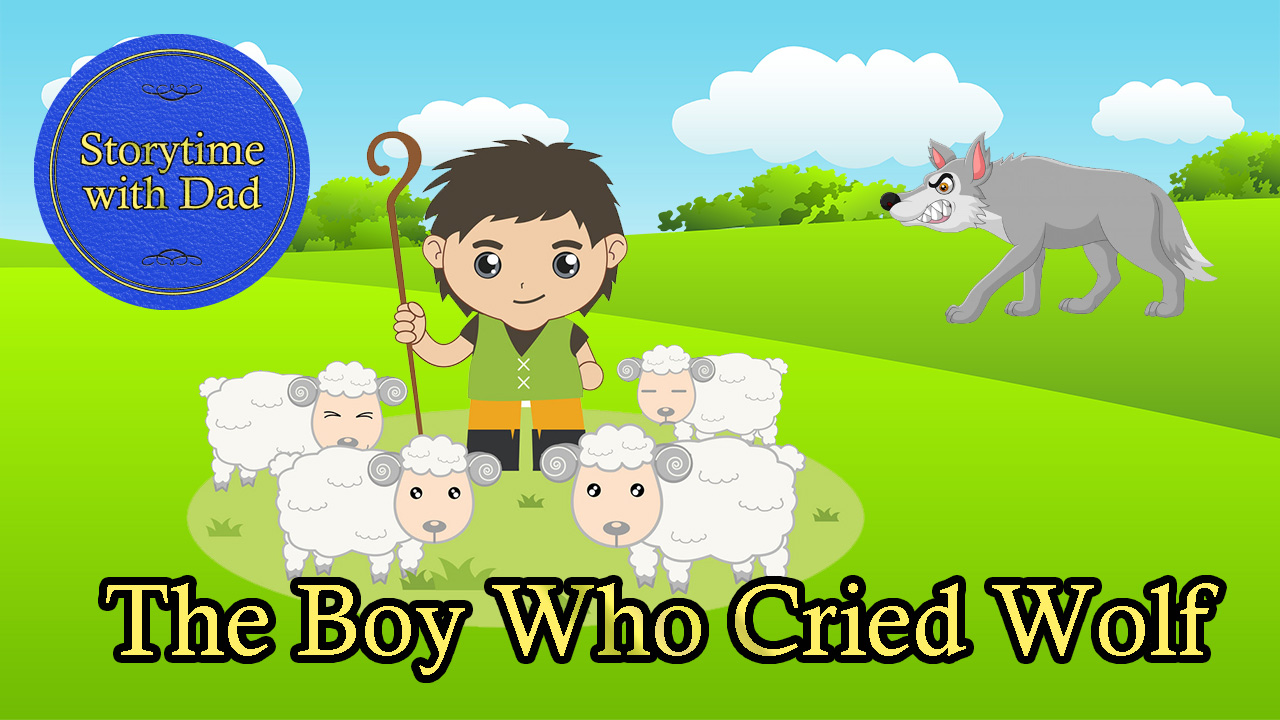 Welcome to Storytime with Dad. Today we will be reading The Boy Who Cried Wolf.

A boy called Peter lived with his parents in a village on the hillside. His parents, like most of the people in the village, were sheep farmers. Everybody in the village took turns to look after the sheep, and when Peter was 10 years old, he was considered old enough to take his turn at shepherding.

But Peter was easily bored. He was really not excited to be on the hillside with only sheep for company. So, he’d find ways to amuse himself, running up rocks, climbing trees, chasing sheep, but nothing really kept him amused for very long. Then he had a great idea. He climbed to the top of the tallest tree, and started shouting towards the village: “Wolf! Wolf! Wooolf!”

One of the villagers heard him and got all the other men together, and armed with axes, hoes and forks, they ran out of the village to chase the wolf away and save their herd. Of course when they got there, they merely found Peter perched high up in his tree, laughing, and the sheep grazing peacefully. They were very annoyed with him. That night Peter got in huge trouble with his parents and was sent to bed early.

For a while life went on again as normal, and people forgot about the incident. Peter managed to behave himself whenever it was his turn to watch the sheep. Until one day, he got really bored again. He picked up some sticks, and running through where the sheep were grazing, he started hitting the sticks together, and shouting: “Wolf! Wolf! Wooolf!”

Sure enough, somebody in the village heard and before long the men all come running up the hill again, armed with their sticks and axes and hoes and shovels, ready to chase away the big bad wolf, and save their sheep and the poor shepherd boy. Imagine their anger when they arrived in the field to see their herd grazing peacefully, and Peter sitting on a big rock, laughing uncontrollably.

That night Peter got yelled at again by his parents, was sent to bed early, and was grounded. For a few days people in the village went around moaning about Peter and his tricks, but before long things settled down again, and life resumed its normal uneventful course. Peter still had to take his turn at shepherding again every now and then. He decided he should behave himself, he really didn’t want to upset everybody all the time, and he especially didn’t want to get grounded again!

Then, one afternoon when Peter was in the fields with the sheep, he noticed some of them were getting nervous, they started bleating and running around. Peter didn’t know what was the cause of this strange behavior, sheep were running all over and making an ever louder racket. He got worried and decided to climb a tree so he could see what was going on. He balanced on a branch and looked around, what he saw almost made him fall out of the tree. There was a great big hairy wolf, chasing the sheep, biting at their legs, snapping at their tails. For a few seconds Peter was speechless. Then he started shouting: “Wolf! Wolf! Wooolf!”

In the village an old man heard the shouting. “Oh my goodness, not that Peter again”, he said, shaking his head. “What’s going on?” enquired another villager. “It’s that Peter again, he just can’t help himself”.

“That boy needs to be the center of attention all the time”, said another. “Wait till his mother gets a hold of him”, added yet another. Nobody believed that this time there really was a wolf, and nobody got their hoe out, or their axe, or shovel. All the sticks were left in the sheds and nobody rushed up the hillside. It wasn’t until later that afternoon, that the boy sent to take over the shepherding from Peter found all the sheep were gone, and Peter was still up in his tree! He was crying, and the villagers found out there really had been a wolf this time.

At last Peter learned his lesson: if you always tell lies, people will eventually stop believing everything you say. Then, when you’re telling the truth for a change, when you really need them to believe you, they won’t.

Now that’s a classic story. The Boy Who Cried Wolf is one of Aesop’s fables, number 210, and it’s about 2500 years old! The wisdom it contains is ancient and still rings true today.

I’ll admit, we’re not all shepherds anymore and we don’t have a village herd to look after. In fact, we don’t really work together as a small community minding our crops and tending to our livestock either. But, we all do have a community that we’re a part of. For you, maybe it’s your school or church, or maybe it’s a sport or an instrument that you play. It could even be an online community – they all count! In these communities you have a reputation. With every word that you say or type, you are building that reputation for yourself. People are watching what you do and judging whether you’re the kind of person who does what they say they do or not. If you lie, people will know – they may not know immediately, but they will learn over time that you are not someone they can trust. They won’t help you when you need it, and you’ll need help with something eventually, and they won’t look to you for support either.

It is your responsibility to tell the truth and build a reputation that you’re proud of. This is good for you and for the community that you’re a part of. I’m not saying it’s easy, but I am saying it is necessary, worth doing, and I know you can do it.

Thanks so much for listening! If you can, please drop me a review on Apple podcasts and if you want to send some words of encouragement to: hello@storytimewithdad.com I’d love to hear from you.

We’ll see you again next time.