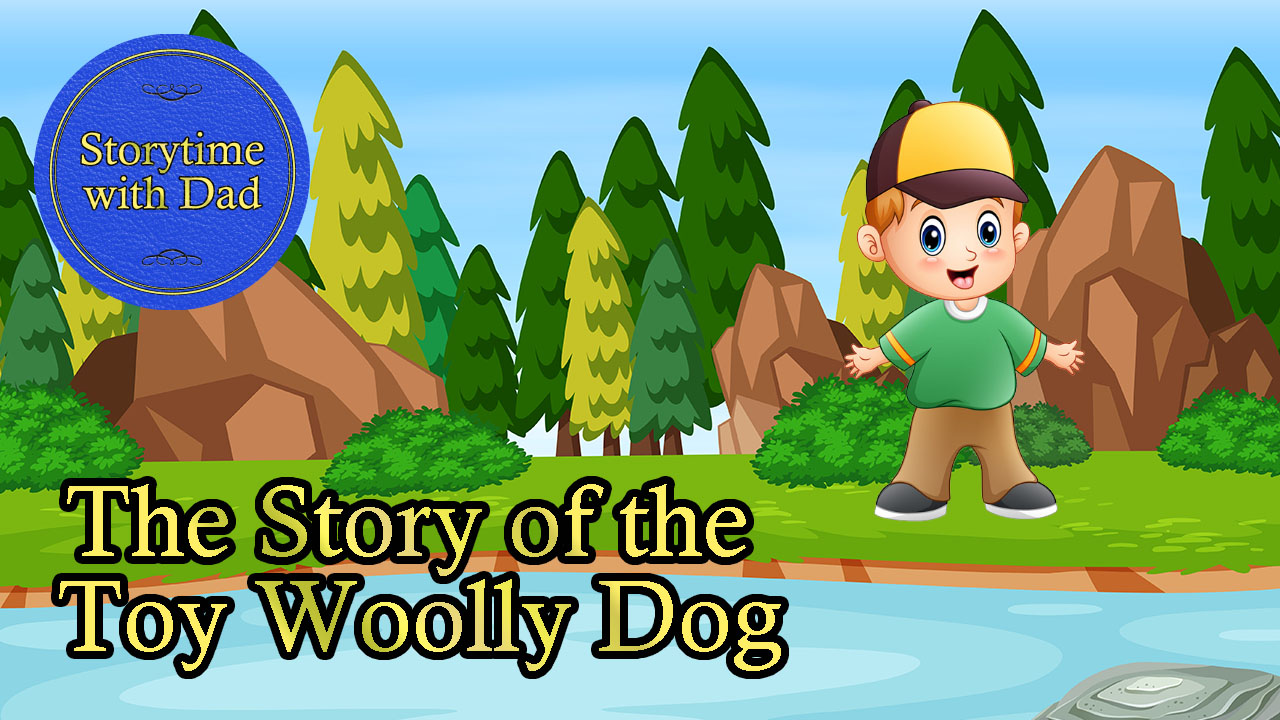 So, one lovely day when the sun was bright and the birds were singing happily, the little boy started out to try to find a little woolly dog with a squeak and a curly tail. The little boy went, and went, and went until he came to a faraway green hill. And on the side of the hill he found an old, white sheep all covered with a warm coat of wool and eating grass. The little boy went up to the sheep and said in her ear, “Kind sheep, will you give me, without fail, a dog with a squeak and a curly tail?”

Then the old sheep stopped eating grass and trotted down the hill with the little boy to a place by the side of a swiftly running, singing little brook were there were a great many sheep. Here, too, were shearers cutting off the sheep’s wool and washing it white in the water. Then, this little boy spoke to the sharers and he said, “Shearers, will you give me, without fail, a dog with a squeak and a curly tail?”

So the sheep shears cut off the soft wool from the old sheep’s back, and washed it snow white in the brook, and they put it in the outstretched hands of the little boy. But they said to him, “Go to the carders and ask them to comb out the wool straight and fine.”

So the little boy thanked the shearers, then he went on further to a place where busy machines, full of sharp toothed combs went swish, swish combing the sheep’s wool. To the carders who tended the machines he said, “Carders, will you give me, without fail, a dog with a squeak and a curly tail?”

The carders took the wool and put it in their carding machine, then they took it out straight and fine and they gave it to the little boy. But they said to him, “You must go to the goatherd who lives in the mountain for a bit of skin to hold your wool.”

So the little boy thanked carders and he went on further to a high mountain where the little kids with teetery, tottery legs jumped from crag to crag beside the goatherd who tended them. And the little boy called to the goatherd, “Goatherd, will you give to me, without fail, a dog with a squeak and a curly tail?”

The goatherd went into his little house on the side of the mountain and brought out a little piece of smooth tough skin. He gave it to the little boy, but he said, “You must go to the cotton-picker for cotton to stuff the skin.”

The cotton-pickers held out a basket of soft white cotton to the little boy. But they said, “You must go to the toy man and ask him to put together your wool, and skin, and cotton.”

So the little boy thanked the cotton-pickers and went farther until he came to a busy toyman, making dolls and picture puzzles, and airplanes, and toy automobiles, and everything else with which it is pleasant to play in his noisy, clattering workshop. And the little boy said to the toyman, “Toyman, will you give to me, without fail, a dog with a squeak and a curly tail?”

“Yes, indeed I will,” answered the toyman. So he got out his glue pot, and his scissors, and his hammer, and his nails, his glass eyes, and his squeaks, and his little curly tails. He fastened them all to the skin, and he stuffed the skin with the cotton, and he very soon handed the little boy a little woolly toy dog. Then the little boy thanked the toy man and ran home as fast as he could, for he was very happy indeed. He had a little rubber toy dog, and a little wooden toy dog, and a little china toy dog, but now he had a little woolly toy dog that would sleep with him at night and walk out with him in the daytime. And it had a squeak and a curly tail.

Well that’s an oldie! I just learned that after sheep gets sheared, the wool goes to someone called a carder to be straightened before it can be used! Guess that’s not something we really experience much these days.

Life used to be very different than it is today. Much of what we owned was something that we worked for. In this story, we can see that for something as simple as a woolly toy dog, there were at least five different, very experienced people involved in making it: the shearer, the carder, the goatherd, the cotton-picker, and the toy maker. The little boy just wanted the toy, but knowing that so much effort went in to making it probably made him care for that toy a lot more than he would have otherwise.

Everything we have today is the same way. Many different professions come together to create the things that we all enjoy. It’s a lot easier to take what we have for granted, though, when we don’t see how it’s made. Whether we see it or not, somebody, somewhere, is still taking time to create these things. The materials come from somewhere, too, and we don’t have an unending supply of everything that we need.

The responsibility is on each of us to appreciate the things we have and to take care of them. Be thankful for your toys, your food, the building you live in. Somebody, somewhere, made them for you.

I hope you liked the story, please drop me a review and email feedback to: hello@storytimewithdad.com. Or tweet me @DadStorytime