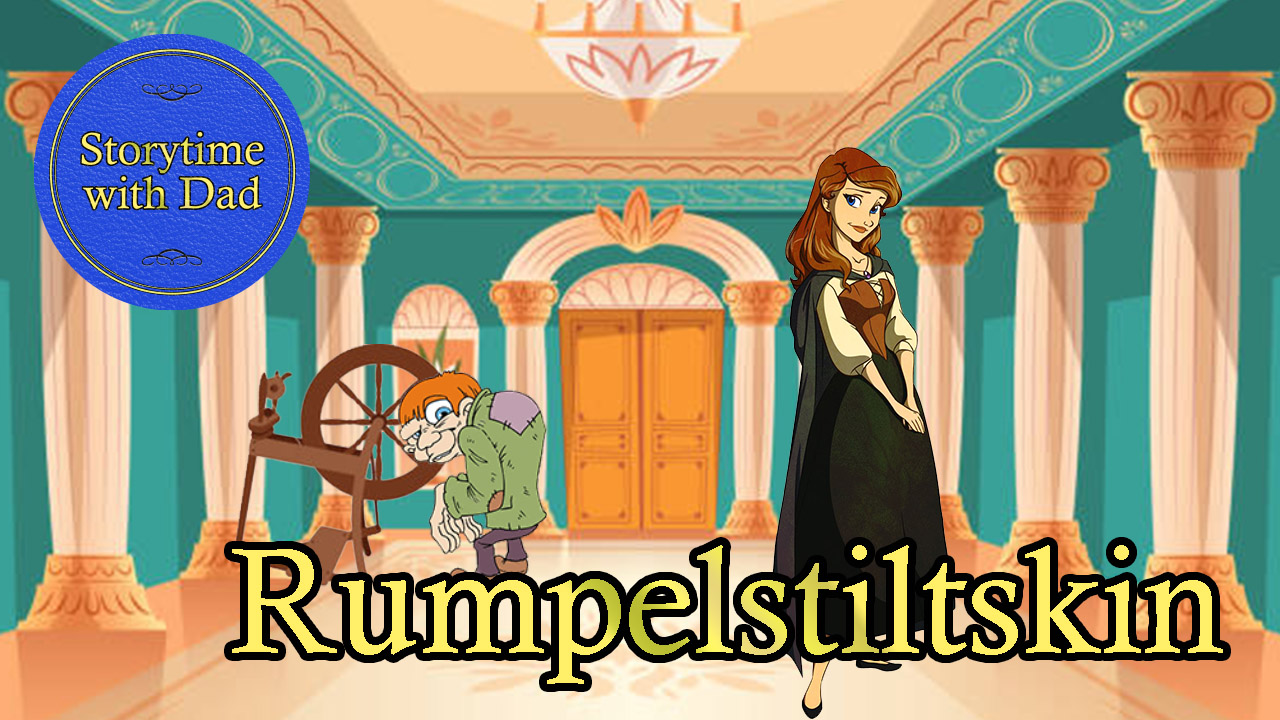 Welcome to Storytime with Dad. Today, we will be reading Rumpelstiltskin.

Once upon a time there was a poor weaver who had a beautiful daughter. When she worked beside him spinning her thread, her hair shone like strands of gold and her father would look at her and sigh. “Daughter, you’re much too beautiful to marry a poor man. You deserve to be married to the king of the realm and to live in great happiness!”

His daughter looked at him and smiled and carried on with her spinning. “I’m happy with you father, and no one has asked me to marry him yet. And anyway, I’ve never even likely to meet the king of the realm!”

Now, one day the weaver and his daughter were sitting at work outside, in the sunshine because their cottage was cold, and damp, and gloomy inside. With walls that were 5 feet thick and a low thatched roof that sank over the tops of the tiny little windows. They were enjoying the bird song when they heard the clattering of hooves and some men on horseback drew up. They were dressed very grand indeed in silks and fine cloth, which the weaver admired. And it was obvious that the grandest of them all was admiring the weaver’s daughter in the way the sunlight gleamed in her long golden hair. “You think she’s beautiful?” the weaver asked thinking to himself how wonderful it would be if this man wanted to marry his daughter.

“I do.” said the fine young man. “I think she’s even more beautiful than any girl I’ve ever seen.”

“More than that,” the cunning weaver said, “She is the cleverest, she can spin straw into gold!”

“Well!” laughed the young man. “I would like to believe that. Perhaps your daughter would come with me and show me? If what you say is true, old man, I will ask your daughter to be my wife. May I take her to my castle?” It was only then that the weaver realized that he was talking to the king himself. He fluttered around his daughter.

“Go on,” he whispered, tripping over bales of cloth in his excitement. “Go with his majesty before he changes his mind!”

“But father,” she whispered back. “How can I? You know I can’t spin straw into gold.”

“Shh,” her father whispered back. “Never mind, he’s half in love with you already. Off you go!” And because she loved her father, she went. He stood at the cottage door and waved goodbye to her, and tears of hope streamed down into his beard. “My daughter will marry the king,” he said. And maybe his words were heard by the creatures of the wood, and maybe they weren’t. As soon as they arrived at the castle the young king put the girl into a room and all that was in it was a spinning wheel and a mound of straw.

“Let’s see what you can do because I would like to marry you,” the king said. “But how could I marry a poor weaver’s daughter?” And he closed the door on her. The girl stared gloomily at the straw.

“Now stop that crying!” She heard a strange croaky voice, and looked around to see a little hump-backed man with skin that was crumpled like an old dry apple. “What will you give me if I spin this straw into gold for you?”

“Can you really do that?”

“I said I could,” the little man snapped holding out his hand. The girl took off her necklace and gave it to him. And he told her to close her eyes and she fell asleep to the sound of the hum of the spinning wheel. And when she woke up, the little man had gone and in the corner of the room where the straw had been there was now a heap of gold.

“This is wonderful!” the king said when he saw it. “But can you do it again?” He ordered more straw and left her in her room, and the girl was more down harder than ever. She thought of her father in his lonely cottage waiting for news of her.

“How can I possibly spin the straw into gold?” she said. “Oh, my poor father. Will I ever see him again?”

“Stop that!” she heard the little man say, and there he was standing next to her and holding out his hand. “We did it once, we’ll do it twice.” So the girl pulled off a ring and gave it to him, and closed her eyes and fell asleep to the sound of the spinning wheel humming. And when she woke up, the little man had gone, and so had the pile of straw. And in its place, there was a heap of gold! When he saw it, the king was even more delighted with her.

“Oh my poor father,” she sobbed.

“Stop that!” there was the little man, standing by her side and holding out his hand. “We did it once, we get it twice, we’ll do it thrice.”

“I’ll spin your straw into gold,” the little man said. “And you will marry the king, and when your first child is born you will give him to me. That’s my bargain. Do you agree?” Outside, the cockerel crowed. Day was coming.

“Yes!” said girl and she closed her eyes. And it was just as the little man with crumpled apple skin had said. The king was so pleased to see that the straw had been turned into gold that he asked the girl to marry him, and she said yes. There was a wonderful wedding and the weaver came to live on the castle grounds and to make fine clothes for his son-in-law the king. A year later, the girl gave birth to a baby boy. On the night of his christening, the girl sat in a room singing her baby to sleep.

“Stop that!” said a voice. And there at her side was the little man holding out his hand. “I’ve come for my child,” he said.

“Please, please don’t take him away from me!” she begged.

“You will have three chances,” he said. “If you haven’t guessed my name by the end of the third day, then the baby will be mine.” And the next moment, he was gone. The girl thought all night and all the next day. She asked everyone she met what their names were. She sent out the king’s servants to collect names and nothing seemed right. That night that little man appeared just as he said he would. “Know my name?” he croaked.

She thought she might as well try the most obvious ones first. “Humpty back?” She suggested.

“No, no!” he stamped his foot on the ground.

“No no, no!” and he stamped and hopped around the room, and the next thing he had gone. The girl sent the servants even farther and they all came back with names that just didn’t seem right. And at midnight, the little man came again. “Know my name?”

This time, she thought she would try the least likely names. She began with, “Harry handsome?”

“No, no, no!” and he laughed and danced around the room. “One last chance,” he croaked. And the next moment, he was gone. Again the girl sent out all the servants, and again they came back with names that just didn’t seem right. Night came and the last servant came home to the castle. He was the groom’s lad, and he ran up the stairs to her room three at a time and pounded on her door.

“This is no time for stories,” said the girl. “Look at the time, it’s nearly midnight.”

“But listen,” the lad said. “I rode over the mountain and through the woods and across the river, and I came to a place I’ve never seen before. I stopped to rest my horse and there, where the fox had his lair and the old owl roosts, I found a little hut. And inside it I heard a croaky voice singing. I peeped through the door and there was a strange little man leaping around his fire and singing.”

“And he’ll be here any minute,” the girl said. “Go away and let me think, the clock is beginning to strike.”

“No,” said the lad. “Listen, this is the song the little man sang: oh I can dance, oh I can sing. Tonight, I’ll have the son of the king. Servants look high, servants look low, they won’t have my secret wherever they go. Servants go back the way they came, Rumpelstiltskin is my name.”

The clock finished striking and the lad ran back to the stable. The girl picked up her baby and there was the little man standing next to her and holding out his hands.

“Could it be Francis, Matthew, or Jeffrey?”

But instead of giving him the baby, the girl began to sing. “Oh I can dance, oh I can sing, you’ll never have the son of the king. Servants looked high, servants looked low. They found out your secret I’ll have you know. Servants came back home again, Rumpelstiltskin is your name!” And she laughed with delight and hugged her baby boy to her. The little man stamped so hard that his foot went right through the floor and he went with it and was never seen again. And the stable lad was given a horse that was the color of gold, and everybody lived happily to the end of their days. The end.

Rumpelstiltskin, that’s a name that really sticks with you. He really was a nasty little guy wasn’t he? We never really learn what he is, but he’s obviously a magical creature. For me, I think the big takeaway here is to not lie and trick others into believing things that seem too good to be true.

The weaver’s daughter found herself in a bad situation. We can blame the dad for putting her into it if we want, but at the end of the day she did go along with the lie, and was stuck trying to make that impossible lie into reality. Conveniently, the magic hump-back Rumpelstiltskin appears to her and has the solution to all of her problems! Unfortunately, the help he offers only gets the girl into the lie deeper. Eventually, she’s so deep that getting out of the lie means she’ll just live the rest of her days in the dungeon. When she no other options, she’s even willing to give up her future (her child) to keep the lie going.

Thankfully, she gets lucky and the story has a happy ending. But, luck is not a plan for life. Things don’t always work out the way we hope. The girl could have avoided getting stuck in this situation if she would have spoken up at the beginning and lived a truthful life. But that’s exactly how lies get us. They start small and we give up a little bit of ourselves to trick others. To keep the lie going, we have to give up more it until it’s so big that revealing the truth will really hurt us and others around us. To keep from experiencing that pain, we’ll do just about anything. The only real solution here is to not get trapped in the first place. That means telling the truth and bearing the consequences when they are small. It may hurt a little, or even a lot, but nowhere near as much as a lie that grows out of control.

I hope you liked the story, please drop me a review on your podcast app, or email feedback and story suggestions to: hello@storytimewithdad.com. Or tweet me @DadStorytime