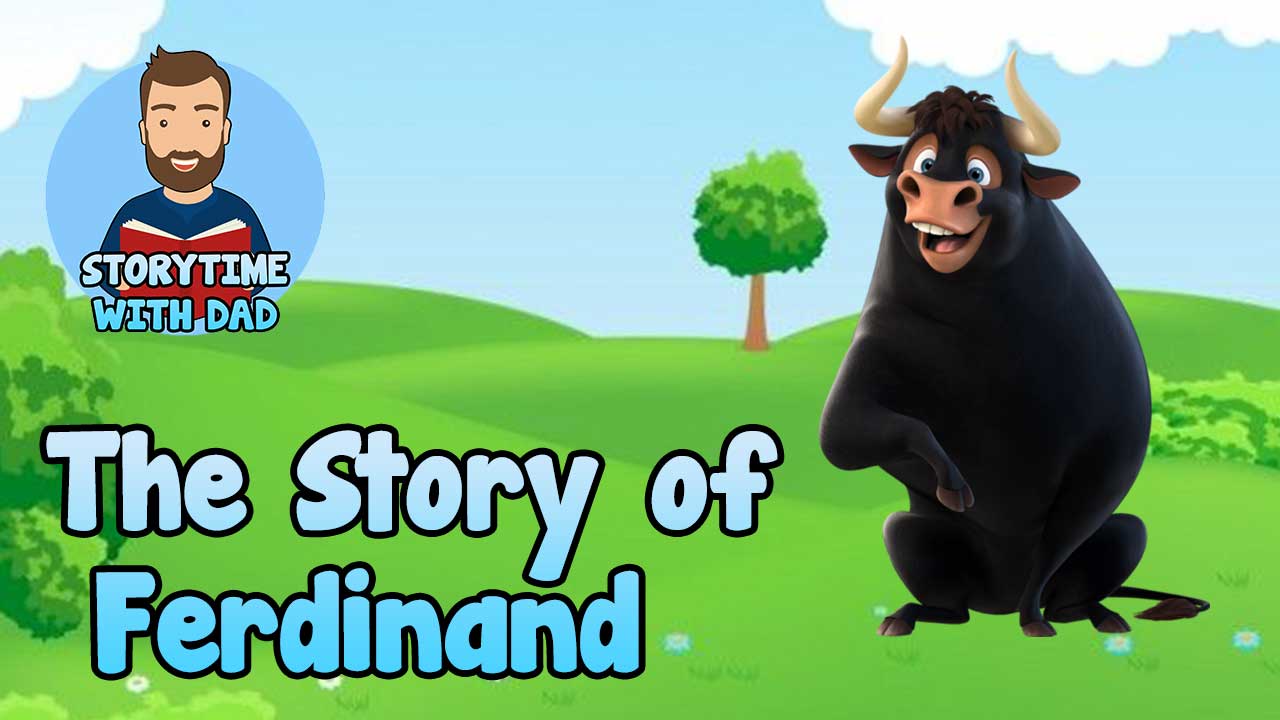 Welcome to Storytime with Dad, today we will be reading The Story of Ferdinand.

Once upon a time in Spain, there was a little bull and his name was Ferdinand. All the other little bulls he lived with would run and jump and butt their heads together, but not Ferdinand. He liked to sit just quietly and smell the flowers.

He had a favorite spot out in the pasture under a cork tree. It was his favorite tree and he would sit in its shade all day and smell the flowers. Sometimes his mother, who was a cow, would worry about him. She was afraid he would be lonesome all by himself.

“Why don’t you run and play with the other little bulls and skip and butt your head?” she would say.

But Ferdinand would shake his head, “I like it better here where I can sit just quietly and smell the flowers.”

His mother saw that he was not lonesome, and because she was an understanding mother, even though she was a cow, she let him just sit there and be happy.

As the years went by Ferdinand grew until he was very big and strong. All the other bulls who had grown up with him in the same pasture would fight each other all day. They would butt each other and stick each other with their horns. What they wanted most of all was to be picked to fight at the bull fights in Madrid.

But not Ferdinand – he still liked to sit just quietly under the cork tree and smell the flowers.

One day five men came in very funny hats to pick the biggest, fastest, roughest bull to fight in the bull fights in Madrid. All the other bulls ran around snorting and butting, leaping and jumping so the men would think they were very very strong and fierce and pick them.

Ferdinand knew that they wouldn’t pick him and he didn’t care. So he went out to his favorite cork tree to sit down. He didn’t look where he was sitting and instead of sitting on the nice cool grass in the shade he sat on a bumble bee.

Well, if you were a bumble bee and a bull sat you what would you do? You would sting him. And that’s just what this bee did to Ferdinand.

Wow! Did it hurt! Ferdinand jumped up with a snort. He ran around puffing and snorting, butting and pawing the ground as if he were crazy.

The five men saw him and they all shouted with joy. Here was the largest and fiercest bull of all. Just the one for the bull fights in Madrid! So they took him away for the bull fight day in a cart. What a day it was! Flags were flying, bands were playing…and all the lovely ladies had flowers in their hair.

They had a parade into the bull ring. First came the Banderilleros with long sharp pins with ribbons on them to stick in the bull and make him mad. Next came the Picadores who rode skinny horses and they had long spears to stick in the bull and make him madder. Then came the Matador, the proudest of all – he thought he was very handsome, and bowed to the ladies. He had a red cape and a sword and was supposed to stick the bull last of all.

Then came the bull, and you know who that was don’t you? Ferdinand.

Ferdinand ran to the middle of the ring and everyone shouted and clapped because they thought he was going to fight fiercely and butt and snort and stick his horns around.

But not Ferdinand. When he got to the middle of the ring he saw the flowers in all the lovely ladies’ hair and he just sat down quietly and smelled.

He wouldn’t fight and be fierce no matter what they did. He just sat and smelled. And the Banderilleros were mad and the Picadores were mad and the Matador was so mad he cried because he couldn’t show off with his cape and sword.

So they had to take Ferdinand home.

And for all I know he is sitting there still, under his favorite cork tree, smelling the flowers just quietly.

He is very happy.

The Story of Ferdinand was my favorite book as a kid, and I hope you liked it too! Ferdinand is a wonderful character who is loving, kind, and not afraid to be who he is no matter what other people want him to be. I think that’s why I like him so much.

Ferdinand knew what he liked and just did it. Like him, I enjoy a walk out by myself or with my dog, tuning out the noise of the world around me, smelling the flowers, sitting under a tree, and being in nature. Those things are important to me.

Now, I don’t know if you’ve noticed this, but it takes a lot of strength to admit that you love something to other people. When we open up and share real things about ourselves, someone might make fun of us for it. I’ve found people tend to do this if we love something they don’t, or if they’re embarassed to admit that they also love it as much as we do.

It doesn’t happen all the time and I don’t know why people do this, but it’s important to not let other people’s opinions of what we love change it for us. The things that make me happy will make me happy whether or not someone else enjoys it, and that’s OK.

I support you being you. Whatever the things are that you love, please don’t be embarrassed by them and don’t let other people take your joy away. We each bring something special into this world by just being who we are, that’s one reason why it’s so beautiful. So – keep being you.

One last thing I love is reading stories. So drop me a line at hello@storytimewithdad.com, or tweet me @dadstorytime with story ideas or just to say hi.