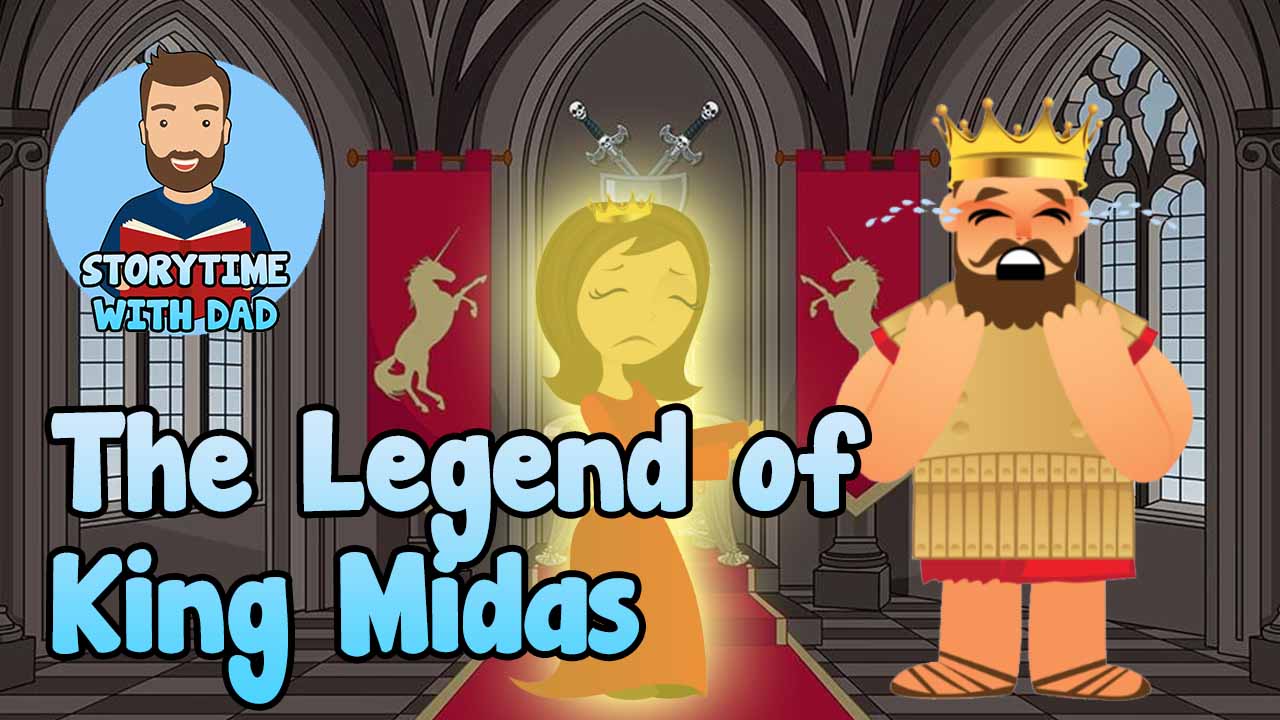 Welcome to Storytime with Dad. Today we will be reading The Legend of King Midas.

Many years ago, there was a king named King Midas. The King was very, very rich. He was the richest king in the world, and he had more gold than any other king in the world. And the King loved his gold. He had a lot, but he always wanted more.

One day, the King was in his room counting his money when a wizard appeared. The wizard said to the King, “I will give you one wish. What do you want?”

The wizard said, “But you already have so much gold! You have more gold than any other king!”

The King said, “I know I have a lot of gold. But gold is the best thing in the world! I want more! I wish that everything I touched would turn to gold.”

The wizard said, “All right, starting tomorrow morning when you wake up, everything you touch will become gold. But I will warn you: this gift will not make you happy.”

“I will take the risk,” said the King.

The next day, the King woke up very early. He was eager to see if his wish had come true, and if everything he touched would turn to gold. The King touched his bed lightly with his hand. The bed turned to gold.

He touched a chair and a table. As soon as he touched them, they both turned to solid gold. The King felt extremely happy. He ran around the room, touching everything he could see. Everything turned to shining, yellow gold.

Soon, the King felt hungry, so he went to the kitchen to eat his breakfast. But when he picked up a glass of water and tried to drink it, the water turned to gold. He couldn’t drink any water!

His young daughter, Rose, came running into the room. The King loved his daughter very much, and he gave her a big hug. But as soon as he touched his daughter, she turned into a golden statue. She couldn’t move!

The King had a feeling of great fear in his heart, and he felt as if all his joy had been taken away. In his sadness, he cried out to the wizard who had given him the gift of the golden touch.

“Wizard!” he called. “Please take away this horrible gift! Take all my gold. Take all my money. Take everything. Just give me back my daughter!”

The wizard appeared and stood in front of the King. “Do you still think that gold is the greatest thing in the world?” asked the wizard.

“Are you sure that you no longer want the golden touch?” asked the wizard.

“Yes, I’m sure,” said the King. “I’ve learned my lesson. I don’t think gold is the greatest thing in the world.”

“All right,” said the wizard, “take this pitcher outside to the river and fill it with water. Then sprinkle it on the things that you have touched and turned to gold.”

The King took the pitcher and rushed outside to the river. Then he ran back inside, and he sprinkled water on the head of his daughter. Instantly, she could move again. She was no longer gold. She was a normal girl again! The King was overjoyed, and he gave his daughter a big hug and a kiss.

Next, the King sprinkled his golden food with water, and it all turned back into real food. Then, he and his daughter sat down to eat breakfast together. The King ate his food and drank his water very eagerly. He disliked the golden touch so much that he even sprinkled the chairs and tables and everything else that he had turned to gold.

Now, the King no longer loves gold. But now he is truly happy because he has his dear daughter.

What an excellent tale! King Midas learned his lesson, but I think he learned it the hard way. King Midas learned to be thankful for what’s truly important in his life, which is the relationships that he had with other people, in particular his daughter. He took his relationship with his daughter, Rose, for granted, and only when he lost it did he understand just how truly valuable and important to him it was.

This happens to all of us. There may be something in your life that you care about very much, but maybe you’ve forgotten it. What are you thankful for? Thanksgiving is just around the corner – this is a time of year to think about all of the things that we have and are grateful for. Do you live in a house? Do you have food to eat? If so, those are just a few things you could be thankful for.

If you want to share what you’re thankful for with me, drop me an email at hello@storytimewithdad.com or tweet me @dadstorytime.