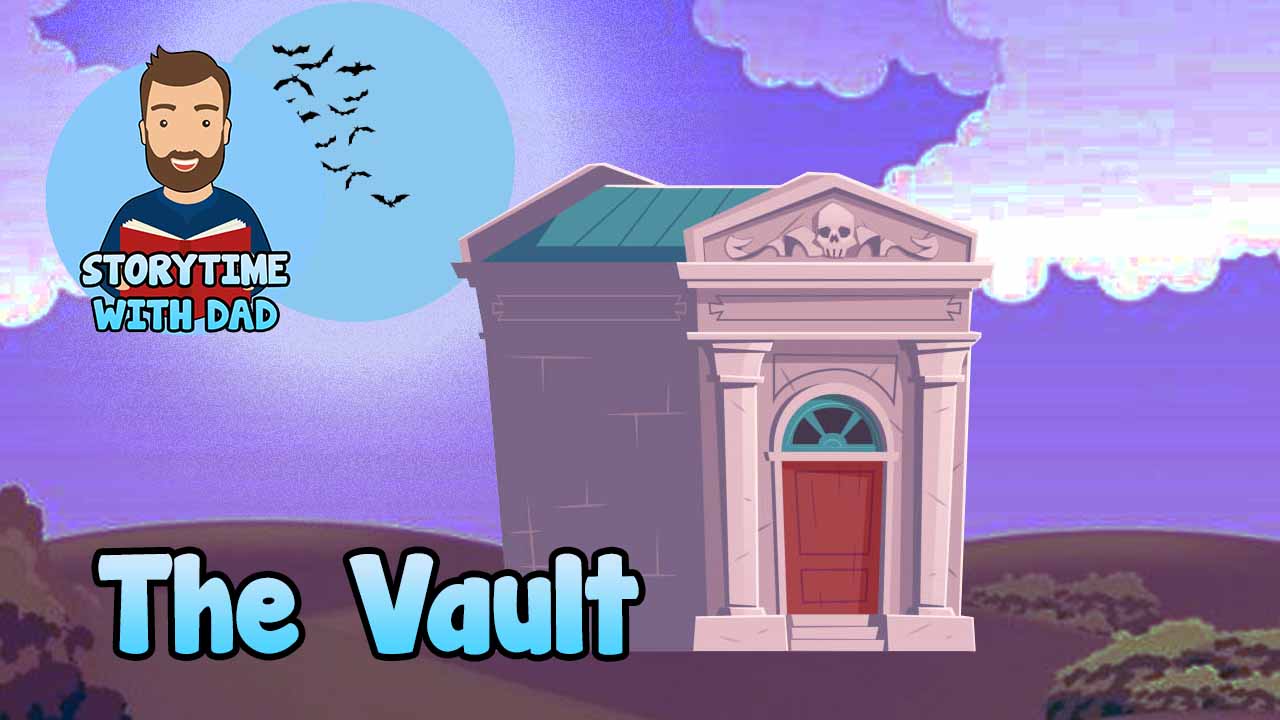 Welcome to Storytime with Dad. Today we will be reading a creepy story called: The Vault.

A boy once got a summer job working in a cemetery. It was not the type of work he would normally choose, but his dad was friends with the undertaker and had convinced him to take the job despite it being a little creepy.

It was a strange place to work and after being there for over a week, the boy still got the creeps when he caught sight of a dead body. Luckily, he didn’t have to get anywhere near them, but this being a cemetery and all, he did catch the occasional glimpse of one.

His work consisted mainly of digging graves, cutting grass, and trimming hedges. His boss, the undertaker, was the one who prepared the dead bodies for burial.

The scariest things, though, were the vaults. Families bought these large tombs and every member of the family who died was placed inside the vault in a coffin. It creeped him out to think about all those bodies lying around inside the dusty chambers and secret rooms.

The boy gradually got used to working in the cemetery and everything went well until, one evening, the unthinkable happened.

While he was inside one of the vaults, sweeping the floor and polishing the nameplates, a gust of wind blew the vault door shut. He realized, to his horror, that he was trapped in the crypt, surrounded by dead bodies in coffins, with no one to help him. His worst nightmare was coming true!

He shouted and hollered but it was no use. The undertaker’s house was too far away and nobody could hear him. Hours passed by. The desperate boy realized that he would have to rely on himself and began searching for a way out.

There was a small open window, high up above the vault door. Unfortunately, it was much too high to reach. Looking around the tomb, he decided that he could use the coffins. If he stacked them up, one on top of the other, they could act like steps for him to climb.

After stacking the coffins up against the door, the boy climbed up them, gingerly, taking care not to tip them over. Just when he thought his plan was working, he stepped on the top coffin and the wood gave way under his weight. His foot went straight through the coffin lid and he felt a sudden, sharp pain in his leg.

Crying out in agony, he could picture the splintered wood and rusty nails slicing into his skin. The stack of coffins began to wobble and for one horrifying moment, he thought he was going to lose his balance and tumble down to the stone floor.

Luckily, he managed to grab onto the window and steady himself. His leg really hurt. Despite the pain he was in, the boy pulled himself up and began shaking his leg to free himself from the coffin lid. The stack of coffins tipped over and smashed to the ground.

Clinging to the window, the boy pulled with all his might and crawled through the narrow opening. He dropped down on the outside and limped towards the undertaker’s house to get help.

The undertaker came out and found the poor boy lying on his doorstep, clutching his leg. He carried the boy to his car and drove him straight to hospital.

After the doctor washed off all the blood, he began to examine the boy’s wounds.

“How did you get these injuries?” asked the doctor.

“I got cut by some broken pieces of wood,” said the boy.

“But these aren’t cuts,” said the doctor. “They’re human bite-marks…”

Well, that’s freaky! I hope it’s not too scary, though. I thought this story was a good one, and some of you parents or older kids may have even heard it before. It’s based on one of H.P. Lovecraft’s classic horror stories called “In the Vault”.

I always like to pick something from the story to appreciate and learn from. And in this story, I like that the boy didn’t just wait there to be saved, he thought about his situation. He realized he was alone and instead of being too afraid to do anything, he looked at the vault and came up with a genius plan to escape! And it worked!

You know, sometimes in life you’ll get stuck too. It may seem like there’s nothing you can do and that you have to wait for someone to save you. But, if you give your situation some thought, often times you’ll realize that you are stronger or smarter than you realize. That pressure you feel “to figure it out” can be a good thing, it can motivate you to try with all your might and actually overcome the problem yourself.

I hope you won’t forget this lesson the next time you feel stuck.