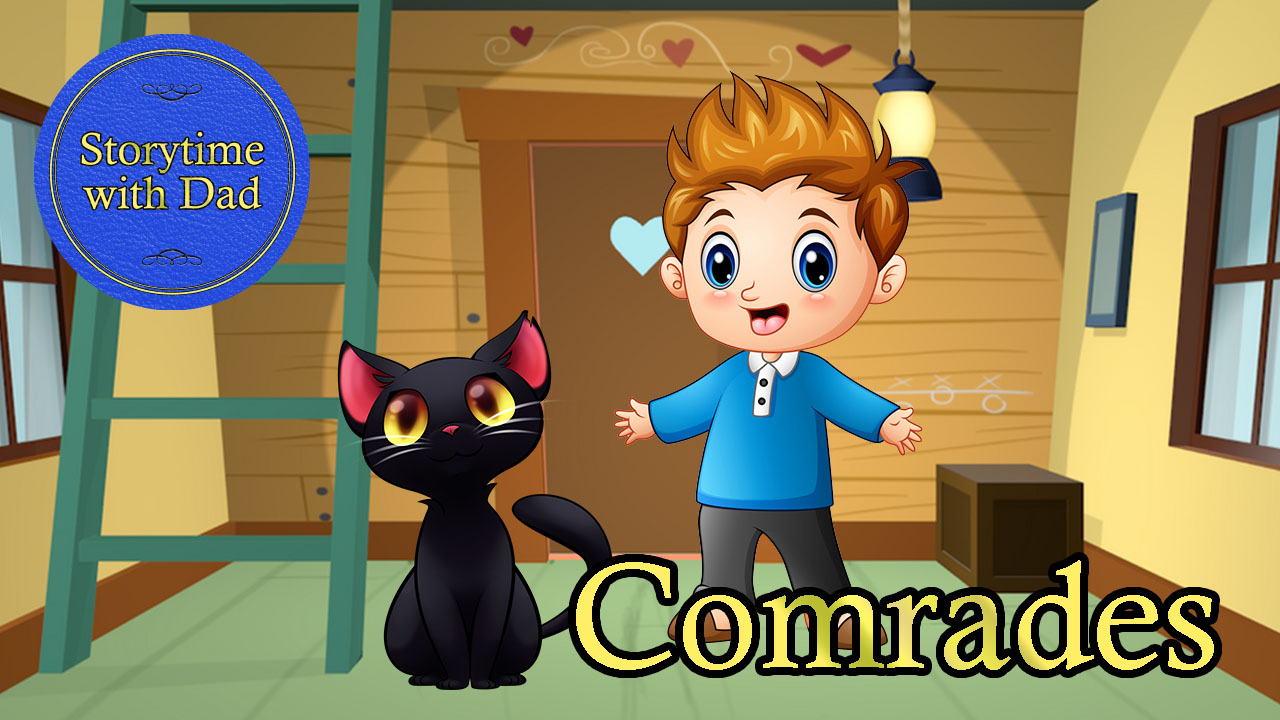 Welcome to Storytime with Dad. Today we will be reading Comrades.

“Meow, meow, meow” cried the little black kitten. He was such a tiny baby kitten, far too young to be out alone, and here he was wandering along the muddy, rainy road, where the ruts were so high and slippery that he kept sliding down into the puddles at the bottom. His wet black fur stuck so closely to him that it looks like a satin coat, and his blue eyes were as full of raindrops as a hungry baby’s are full of tears.

If you can understand cat language, you will understand that all those meows meant, “I want to cuddle up to my warm mother, I want some milk, I’m scared and lost and oh dear!” – flop! He went into another puddle. His mother was lying in front of a warm stove with two kittens cuddled up to her asleep. She did not even notice that her third and smallest baby had been shut out when she and her family came into the kitchen that morning after their usual walk. Some kitten mothers are not at all like boy-and-girl mothers, are they?

Trot, trot, trot came a brown pony down the road and splash, splash went the muddy water from the pony’s hooves and the wheels of the tiny milk, eggs, and butter wagon which the pony drew. The kitten was so spattered with mud that he looked like some brown spotted animal and no pony except a very kind one would have done what milk, eggs, and butter pony did. He stopped short, making the bottles in the cart jingle together and the eggs shiver for fear that they would crack, put his ears forward, and give a low, soft whinny.

The driver was the kind of man who knows what animals mean, and instead of cracking his whip and crying “giddy-up”, he jumped out of the car to see what was the matter. By that time, the black kitten was almost scared to death! Right over him was the brown pony’s big soft mouth; close behind him were the brown pony’s hooves; and to the black kitten he seemed like a huge monster ready to crush him!

“Whinny, whinny, whinny,” repeated the pony. “Don’t be afraid, we will take care of you,” was what he was saying. But the poor kitten, with his ears full of mud, was unable to understand and just crouched down in the road shaking all over.

“Why it’s a little kitten! Poor wee creature,” exclaimed the driver, and although the black kitten was still too scared to understand the words, he understood the warm hands which picked him up, and the dry pocket of the raincoat into which he was slipped.

In front of a blazing fire that evening sat a little boy named Peter. Toys were scattered all around him, splendid toys – a big drum, a music box, blocks, toy soldiers, and picture books! But in spite of them all, Peter was looking very sad. His blue eyes were like the kitten’s eyes that morning when they were full of raindrops, but there were no raindrops in that cozy Nursery.

“Crackle, crackle, laugh with me!” chuckled the flames in the fireplace, but Peter’s lips went still further up in the middle and down in the corners. “Master Peter, here’s your supper,” said Nurse bustling in. “Whatever is the matter with you I don’t know. Why don’t you laugh and play and eat heartily as you used to?”

She put a bowl of bread and milk on the little table in front of the fire, and hurried off to talk to the Cook about a party that they were going to that night when “Master Peter” was asleep.

Through his tears, Peter looked at his supper. Happy little flames shown on the silver mug and spoon making them look as though the fire danced there also. The flames laughed to see themselves shining on the silver as in a mirror! The funny blue ships and Chinese sailors on the bowl of bread and milk and on the saucer of cookies, shown so clearly in the firelight that the ship seemed to sail and the sailors to run up and down the road. On most evenings Peter would have laughed with them, but tonight he felt just as the black kitten had felt in the muddy road that morning, lonely and homesick. His mother had gone away on a visit, and her goodbye present to him had been all the splendid toys scattered on the floor.

“They will keep you happy dear,” she had said when she kissed him goodbye. But Peter wanted something more than toys to make him happy. He wanted something, somebody, very real for him to play with. There were no children in the neighboring houses, and for the last three days the rain had kept Nurse from taking him to the park. That’s where he would have played with Jack, and Polly, and little Ray.

Peter did not know what made him so sad, but he felt a weird lump come in his throat and in another moment the rain drops in his eyes would have turned into a real storm of tears when – the door opened softly and in walked the black kitten! Then the door was closed quickly by someone outside. Perhaps it was the milk, eggs, and butter man. Or do you think it could have been the brown pony himself?

He was the one who had saved the black kitten’s life, you know, and who understood all about kittens and little boys, too. Peter sometimes drove behind him with the Milk Man, and once he had rode up on his back! So I have a feeling that he had something to do with it.

No one ever knew who opened that door, of course, but soon the whole house knew that Peter, sorrowful, tearful, lonely little Peter had found a friend. With a meow of delight, the black kitten ran to Peter; and the little boy cuddled it in his arms and fed it milk out of his blue and white bowl and scampered happily around the nursery with it until, happy and sleepy, they rolled up together in a warm ball in front of the dancing flames and went to sleep.

There Nurse found them, and although at first she was not glad to have the black kitten living in the nursery, she had not the heart to say so when she saw Peter’s shining, happy face.

“Nurse, nurse, see who’s come to play with me!” mumbled Peter sleepily. “He must sleep on a pillow beside my crib and eat out of my blue ship bowl, and have the belt of my blouse to tie in a bow around his neck on Sundays! See how he loves me, Nurse, he is purring the way the kettle sings and -” but here Peter fell asleep again, while Nurse tucked him up in his cozy bed with the kitten beside him.

That night, when Nurse had gone to the party, a log fell forward in the big fireplace and one happy little flame sprang out and danced up and down before it leaped up the chimney. It lighted up the corners of the nursery and of course it look for Peter. There he lay, fast asleep, dreaming of his kitten, and there, on a cushion beside the crib, was curled the black little kitten dreaming of Peter. The flame shown a little more brightly so that it could peek under the eyelids of the boy and the kitten; there was not a trace of raindrops in one of the four blue eyes, nothing but shining dreams in them all.

The flame was just settling back to skip happily up the chimney when it heard outside a soft “neigh, neigh!” It was the brown pony, jogging home after a late, last delivery of cream, and of course the flame, which understood the dreams of a little boy and a kitten, understood what the pony was saying.

Comrades is a short story by Mary Stewart, and it does a great job showing the importance of friendship in a person (or animal’s) life. We see clearly in each creature, a human, a kitten, and a horse, that although we may have our own languages, we have a common need for friendship and closeness with other creatures.

The horse is wise and understands this more than most. So, the story suggests that he is the one who united Peter and the kitten. Regardless of who did it, this turned out to be exactly what Peter needed when his mother went on a trip. You see, toys and objects don’t bring us happiness, but friendship and relationships with other people do.

The mother in the story didn’t understand this. She seemed to think that Peter would be happy if she gave him some toys to entertain himself while she way away. But, Peter was very sad. All he wanted was to be with his mom or with his friends at the park. The toys may have been fun at first, but they quickly became boring and meaningless to him.

I’m sure you have toys or things in your life that have become old and no longer interest you as they once did. But people and relationships aren’t like that. Relationships can bring real joy and happiness, so it’s important to take time, make friends, and really work on those friendships. Much later in your life the toy of today will be long forgotten, but the friends that played with you won’t.

I hope you liked the story, please drop me a review and email feedback to: hello@storytimewithdad.com. Or tweet me @DadStorytime