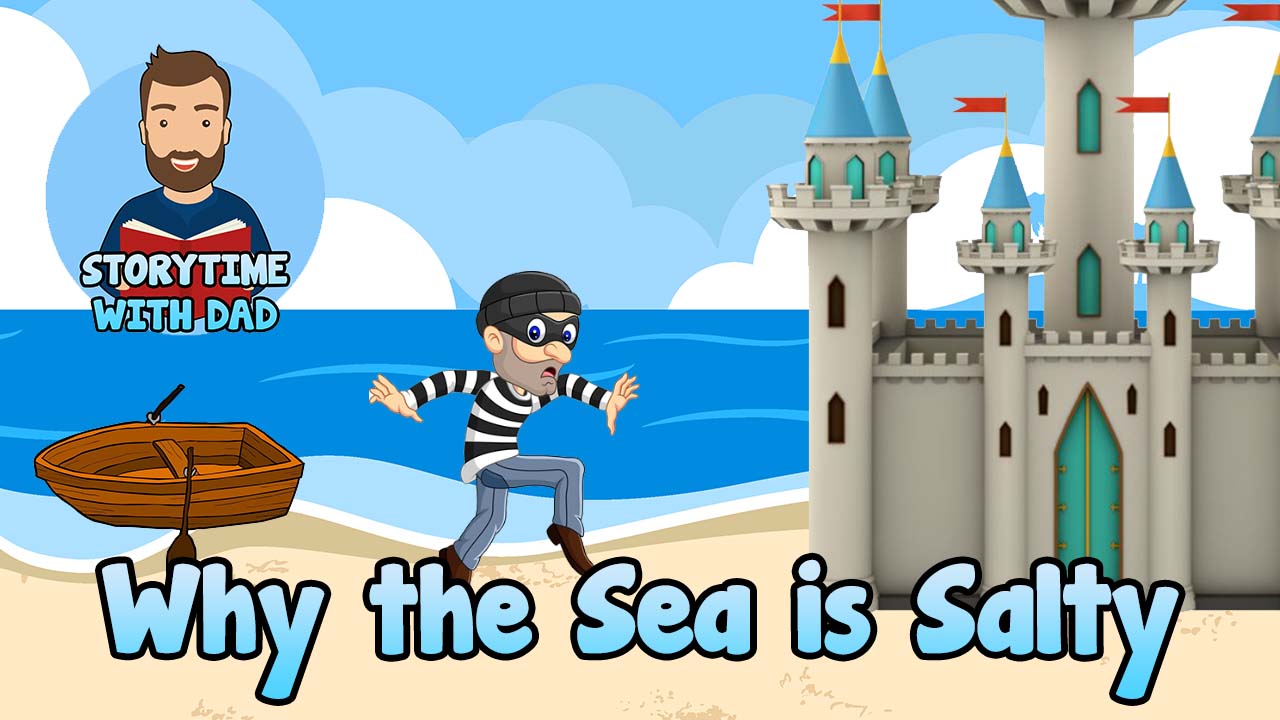 Welcome to Storytime with Dad. Today we will be reading Why the Sea is Salty.

Long ago, the sea wasn’t as salty as it is today. Once, it was pure and sweet like springwater – so pure that people could drink it up anytime they felt thirsty. So what happened to it?

The story begins with a magic millstone that belonged to a great king. The king owned many precious things, but there was nothing more important to him than his prized millstone.

Most millstones are used for grinding up wheat to make flour, but this one was different. For a start, it turned by itself. And when it turned, it didn’t make flour – instead it made heaps of glittering jewels and gold!

Sometimes, though, it made sacks full of rare herbs and spices. Why? Because it would produce anything the king wished for. The king’s treasure chests were always full and his food was always delicious because of the magic millstone.

One day, a thief was sipping tea and overheard a castle guard talking about the millstone. “I’ll steal it,” he thought. “It’ll make me rich! Now, I just need to find out where the king keeps it…”

The thief disguised himself as a rich traveller and went to the palace. He told the guards that he had come from a long, long way away just to see where the king lived. “I’ve heard the palace is magnificent!” he said.

A kind guard offered to show him around. At first, they walked through the gardens and saw beautiful flowers and plants of all types, but there was no sign of a millstone.

Next, they visited the throne room. There were huge towering columns and a big red throne, but still not sign of the millstone.

Last, they came to the royal bedroom. The thief still couldn’t find the millstone, but a mattress laying on the floor made him wonder. “Oh drat,” he told the guard. “I was hoping to see the king’s famous, magic millstone, but I suppose it’s probably hidden away isn’t it?”

“Of course!” said the guard, laughing. “It’s much too valuable to by lying around in the open.”

“I bet I can guess where it’s hidden,” said the thief. “It’s in the stables.”

“Don’t be silly, it would get dirty out there with the horses,” said the guard.

“No, it would get too dusty up there, and it would be hard to reach!” replied the guard.

“Hah, well I bet you don’t know where it is either,” teased the thief.

“Oh yes I do!” said the guard indignantly. “It’s under the king’s bed.”

“And I suppose you have to be a magician to use the millstone as well, eh?” said the thief.

“Oh no, I’ve seen the king. You just have to tap it three times and say what you want.”

The thief left the palace with a big wave. “Thanks for the tour!” he told the guard. “You were a big help.” He grinned and walked away.

“More help than you know, heh heh” the thief chuckled under his breath.

Later that day, the thief snuck back into the castle. He scaled a wall and tip toed through the grounds towards the palace. Once inside, he tiptoed to the empty bedroom, reached under the mattress, and found the millstone right where the guard said it would be!

He pulled the millstone out and gazed at it in delight. Then, he hid it under his cloak and ran away as fast as he could.

He ran all the way to the sea. A boat bobbed by the water’s edge. It didn’t belong to him, but he didn’t care – he was a thief! He leaped in and took the boat out to sea.

Once he was safely out in the water, he pulled out the millstone. “What should I ask for first?” he mused.

While he was thinking, he unwrapped some food and took a big bite.

“Bleh!” he spat it out in disgust. “This needs salt.” Then he grinned, “That’s what I should ask for.”

He tapped the millstone three times and said “I want salt.”

At once, the millstone began to turn, and a sparkling stream of bright, white salt poured out. “I did it!” cried the thief.

He sprinkled some salt on his food and ate away happily. Then he fell asleep under the stars, dreaming of the riches that would be his. Meanwhile, the millstone kept turning and the salt kept streaming out. This continued all night long and the thief had no idea.

By morning, the pile of salt was as big as the boat and the thief was getting buried!

As the sun began to rise, the thief sleepily noticed the salt covering his legs. “Stop millstone!” he cried, but the mountain kept growing.

“Didn’t you hear? Stop!” he yelled again, but the millstone kept turning and the boat began sinking from all the weight. Before long, water was lapping up into the boat over the sides.

Still, the millstone kept turning. “Hey, I’ll just throw the millstone overboard,” thought the thief. He dug around and around, but the millstone was nowhere to be seen. It was really deep in the mountain of salt.

Eventually, the boat cracked and sunk into the water completely, taking the millstone with it. And there, the millstone has stayed, producing salt ever since even to this day. And that is why they say the sea is salty.

As for the thief, he had to swim all the way home. When he finally splashed ashore, there was an angry king waiting for him. He never did get his riches, and instead he ended up in jail.

Well that was fun! I think my takeaway from this story is obviously, not to be a thief! Now, it’s OK if you want things that other people have, but stealing those things is not OK. It hurts other people.

In this case, I don’t know how the king came by the millstone, but we do know he cared a lot about it and it probably helped him run his kingdom. The thief, in taking the millstone, is going to make it a lot harder for the king to run things and care for his people. So, really, thief is hurting everyone in the kingdom by being selfish and stealing the millstone.

It’s a hard lesson for the thief to learn, but I’m sure the king was able to manage even without the millstone. So don’t worry, kings know what they’re doing.

I hope you liked this story, please tell me all about it at hello@storytimewithdad.com, or you can follow me on instagram @storytimewithdadpod. I would love to hear from you.

It’s been a while since I’ve read a story, so thank you for the break! We’re now expecting baby number three in a few weeks and I will be putting out more stories this year. So tell me what kinds of stories you like to hear and I’ll get those recorded.