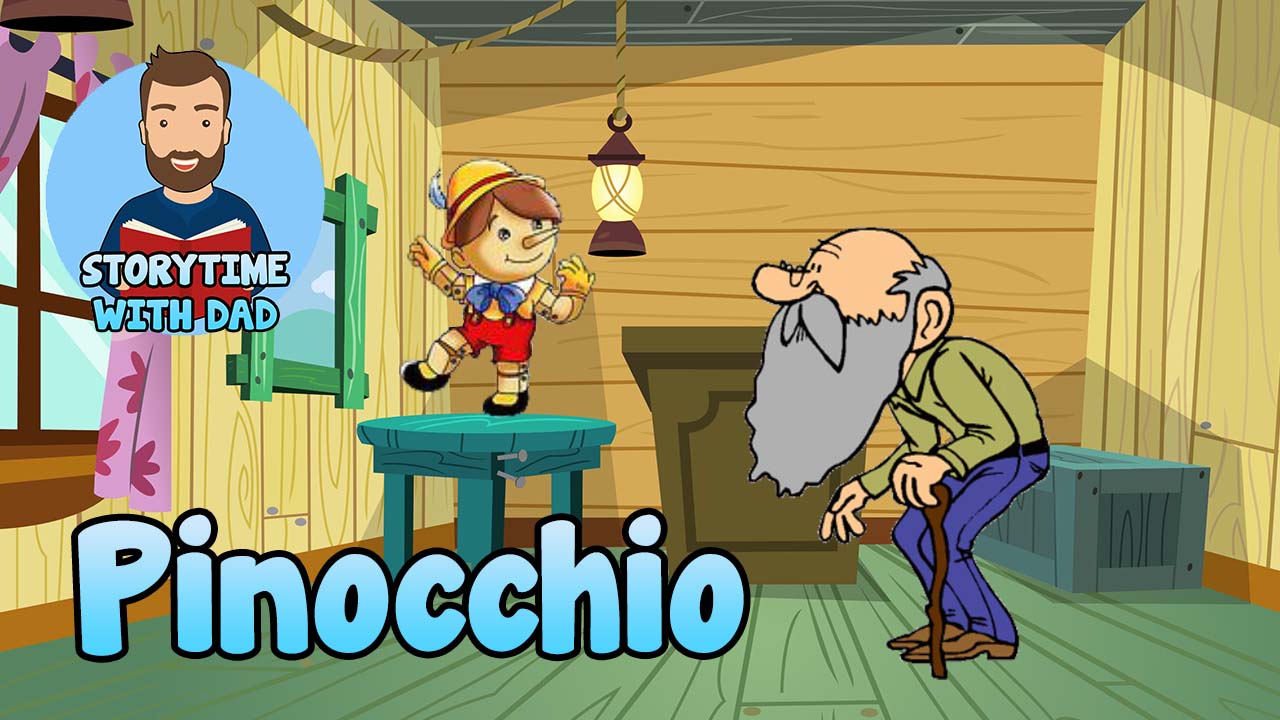 Welcome to Storytime with Dad. Today we will be reading Pinocchio.

This is the story of Pinocchio the puppet. It begins with a piece of wood, propped up in a carpenter’s workshop. The carpenter’s name was Gepetto and he had decided to make a puppet.

“I’ll call him Pinocchio,” murmured Gepetto, as he carves a small, snub nose. “He’ll be the son I never had.”

Just then, the nose began to grow.

“How odd,” thought Gepetto, trimming the wooden nose. He carefully carved a little mouth… and a red tongue poked out.

No sooner had Gepetto finished his puppet than it jumped to its feet. Snatching the carpenter’s wig, it ran off down the lane.

“Oh no you don’t!” shouted Gepetto, waving his chisel and racing after the puppet.

“Put that weapon down now,” boomed a gruff policeman. “Otherwise I’ll arrest you for threatening a puppet.”

“Officer,” Gepetto pleaded, “that puppet is my son.”

“And I’m the tooth fairy,” chortled the policeman.

While Gepetto argued with the policeman, Pinocchio skipped back home.

He settled into Gepetto’s chair and warmed his feet by the fire.

“This is the life,” he murmured.

Pinocchio looked up and saw a little cricket. “You should be ashamed of yourself,” the cricket said, “running away from your poor father!”

The cricket gave a sigh, “Don’t you want to be a real boy? Only good sons get the chance to become real.”

“Leave me alone!” Pinocchio cried, and he threw a hammer at the cricket. Thud!

By now, the puppet was starving. He cracked open an egg to fry it, but out flew a chick.

“Bother!” huffed Pinocchio. “Where’s Gepetto when you need him?”

“And hungry,” added Pinocchio. Gepetto laughed and found the puppet some food.

“I’ll try to be good from now on,” said Pinocchio.

“Well, let’s start by sending you to school,” said Gepetto. He bought Pinocchio some clothes and a book, and sent him off to school.

“Come straight back after lessons!” he told him.

Pinocchio really did intend to go to school… until he spotted a long line of people.

“We’re waiting for the puppet show,” answered a friendly-looking man.

He had forgotten all about being good. The second the doors opened, he raced inside to find the best seat.

Two famous puppets, Harlequin and Punchinello, pranced onto the stage. Their dances and tricks had the audience howling with laughter. Halfway through they stopped, bent down and peered at Pinocchio. “Another puppet!” they cried. “Come and join us.”

Before Pinocchio could say no, he was pulled on stage and surrounded by excited puppets. They bombarded him with questions and quite forgot about the audience.

Soon there were boos from the crowd, followed by a dreadful hush as a fierce man stormed up. He whisked the puppets backstage and glowered at Pinocchio. “You ruined my show!” he growled.

“Just get out of here,” snarled the man. “Or you’ll be firewood.”

Pinocchio didn’t need telling twice. He raced off down the street, his nose itching as he ran. He could feel it growing longer and longer.

“Not you again,” puffed Pinocchio. He flicked the cricket away, but it was tricky to run with a very long nose. Pinocchio slumped down on a patch of grass.

“I wish I’d gone to school,” he said. Instantly, his nose began to shorten. “I must try harder to be a good son,” he went on, and his nose shrank back to its normal size.

“Coooo!” called a pigeon. “Gepetto is looking for you.”

“Where is he?” asked Pinocchio, quickly.

“I will take you,” the pigeon replied. “Climb onto my back.”

The pigeon swooped the puppet into the sky and they flew towards the coast. Far below, Pinocchio saw a small boat setting out to sea. He could just make out a silver-haired man pulling at the oars.

At that very moment, a large wave engulfed the boat and it disappeared from view.

“Don’t worry, I’ll save you!” shouted the brave puppet. He leaped from the pigeon and dived into the ocean. Pinocchio swam and swam until he could swim no more.

He was washed up, wet and miserable, onto a sandy beach. There was distant laughter, but poor Pinocchio was too exhausted to move.

Soon there were voices too.

“A puppet with no strings, imagine that.”

“Who are you?” mumbled Pinocchio, opening his eyes. “Where am I?”

“Welcome to the Land of Lost Toys,” said a lively jack-in-the-box. “Here, we only have fun, fun, and more fun.”

“Too upset to have fun!?” scoffed the clown. “We’ll see about that.”

The toys lifted Pinocchio to his feet and gave him a tour of their island. It was one enormous funfair. In no time, Pinocchio was whooping with glee on the world’s biggest roller-coaster.

“Are you a lost toy too?” asked a teddy bear.

“The toys are my only family,” said a rabbit.

“Me too,” lied Pinocchio. His itchy nose began to grow longer.

“You foolish, fibbing puppet,” buzzed a voice inside Pinocchio’s head.

“Wait!” cried Pinocchio, suddenly thinking of Gepetto, adrift in his boat. “What am I doing? I must help my dad.”

He clambered off the roller-coast, sped down to the beach and waded into the water.

“I’m coming, Dad!” he yelled, as he swam out to sea. Then he felt a rush of water and everything went dark.

Pinocchio found himself in a squelchy tunnel. He saw a dim light in the distance and walked towards it, then stopped in amazement. There, sitting at a wooden desk, was a silver-haired man.

“Dad!” the puppet exclaimed. “I promise I’ll be good from now on. And I’ll start by getting us out of here.”

Pinocchio guided Gepetto along the dark, squelchy tunnel. They reached the mouth of a cave that was barred with pointy rocks. Across the moonlit sea, Pinocchio glimpsed dry land.

Two drenched, but happy figured arrived at Gepetto’s house late that night. The old man lit an oil lamp and gazed in wonder at Pinocchio.

Way to go, Pinocchio! You saved your Dad! I’m personally, very happy that I’ve never been sucked into the ocean in a boat. In other versions of this story, the Dad even gets swallowed by a giant sea monster/whale looking creature. So I’m glad I’ve avoided that fate as well.

If you were paying attention, you’ll notice that every time Pinocchio lied, his nose grew. But what on earth does that even mean? My nose doesn’t grow when I lie. But, I’m also not a puppet, I promise. I think what the story is telling us is that when we lie, other people don’t get to see who we truly are. This story is all about Pinocchio learning how to tell the truth and be selfless. You know, being kind to other people. When we are kind to people and tell them the truth, they get to see us and know us for who we really are, and that’s a good thing.

When we lie or are selfish, we end up hurting other people. At the beginning of the story, Pinocchio ran away from his Dad and got him in trouble with the police. Then he went home and was grumpy, hungry, and acted like he was king of the house. But he still needed his Dad and had to wait for Gepetto to get home to help him get dinner – I’m sure that was a rough night for both of them.

Later, Pinocchio did this again by making everyone mad when he skipped school to go see the puppet show. He ruined the whole act by getting up on stage and distracting the puppets. Thankfully, by the end of the story, Pinocchio learns his lesson and gets his greatest wish granted – to be a real boy.

In your own life, I hope you choose to tell the truth and to be kind to other people. Your life will be better for it, and so will others.

I hope you enjoyed Pinocchio, please don’t forget to email me at hello@storytimewithdad.com if you have story suggestions, or you can follow me on instagram @storytimewithdadpod as well.