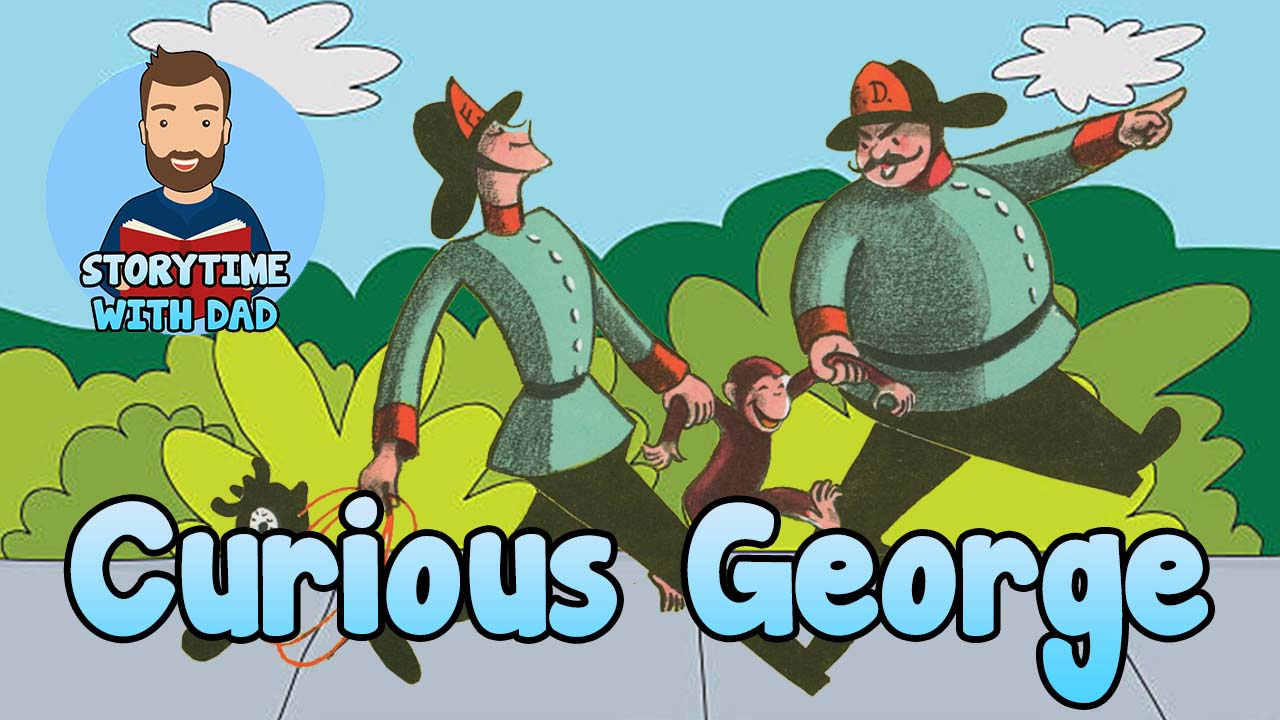 Welcome to Storytime with Dad. Today we will be reading Curious George.

George is a monkey.

He lived in Africa.

He was a good little monkey and always very curious.

One day George saw a man. He had on a large yellow straw hat.

The man saw George too. “What a nice little monkey,” he thought. “I would like to take him home with me.”

He put his hat on the ground and, of course, George was curious. He came down from the tree to look at the large yellow hat. The hat had been on the man’s head. George thought it would be nice to have it on his own head.

He picked it up and put it on. The hat covered George’s head. He couldn’t see. The man picked him up quickly and popped him into a bag.

The man with the big yellow hat put George into a little boat, and a sailor rowed them both across the water to a big ship. George was sad, but he was still a little curious.

On the big ship, things began to happen. The man took off the bag.

George sat on a little stool and the man said, “George, I am going to take you to a big Zoo in a big city. You will like it there. Now run along and play, but don’t get into trouble.”

George promised to be good. But it is easy for little monkeys to forget. On the deck he found some sea gulls.

He wondered how they could fly. He was very curious.

Finally he HAD to try. It looked easy. But—oh, what happened! George fell out of the boat!

The sailors looked and looked. At last they saw him struggling in the water, and almost all tired out. “Man overboard!” the sailors cried as they threw him a lifebelt.

George caught it and held on. At last he was safe on board. After that George was more careful to be a good monkey, until, at last, the long trip was over.

George said good-bye to the kind sailors, and he and the man with the yellow hat walked off the ship on to the shore and on into the city to the man’s house.

After a good meal George felt very tired. He crawled into bed and fell asleep at once. The next morning the man telephoned the Zoo.

George watched him. He was fascinated. Then the man went away. George was curious. He wanted to telephone, too.

GEORGE HAD TELEPHONED THE FIRE STATION!

The firemen rushed to the telephone. “Hello! Hello!” they said. But there was no answer. Then they looked for the signal on the big map that showed where the telephone call had come from. They didn’t know it was GEORGE. They thought it was a real fire.

The firemen jumped on to the fire engines and on to the hook-and-ladders.

Everyone out of the way!

The firemen rushed into the house. They opened the door. NO FIRE! ONLY a naughty little monkey. “Oh, catch him, catch him,” they cried.

George tried to run away.

“You fooled the fire department,” they said. “We will have to shut you up where you can’t do any more harm.” They took him away and shut him in a prison.

George wanted to get out. He climbed up to the window to try the bars.

Just then the watchman came in. He got on the wooden bed to catch George. But he was too big and heavy. The bed tipped up, the watchman fell over, and, quick as lightning, George ran out through the open door. He hurried through the building and out on to the roof. And then he was lucky to be a monkey: out he walked on to the telephone wires.

Quickly and quietly over the guard’s head, George walked away. He was free!

Down in the street outside the prison wall, stood a balloon man. A little girl bought a balloon for her brother. George watched.

He was curious again. He felt he MUST have a bright red balloon. He reached over and tried to help himself, but—instead of one balloon, the whole bunch broke loose.

In an instant the wind whisked them all away and, with them, went George, holding tight with both hands. Up, up he sailed, higher and higher. The houses looked like toy houses and the people like dolls.

George was frightened. He held on very tight. At first the wind blew in great gusts. Then it quieted. Finally it stopped blowing altogether.

George was very tired. Down, down he went—bump, on to the top of a traffic light. Everyone was surprised. The traffic got all mixed up. George didn’t know what to do, and then he heard someone call, “GEORGE!”

What a nice place for George to live!

George is a crazy monkey isn’t he? He’s into everything causing trouble and being naughty, but I guess that’s why the story is so fun. I like seeing George be curious and try new things, but I also like learning through his experience why some things are naughty and why we don’t do them.

Sometimes adults have to tell us not to do things even though it looks fun, but you can see how this worked out for George. First, he tried to fly like a bird by jumping off the ship, and almost got lost at sea! Next, he played with the telephone and made the fire department think there was an emergency! Then, he caused trouble by messing around with traffic lights.

Now, thankfully, nobody got really hurt while he was being curious, but he certainly worried and scared some people. That’s not nice, and I hope George learned his lesson from this story. But in the end, he had an adult, the man in the yellow hat, to help him stop getting into trouble.

My takeaway from this story is to get help from adults when we try new things. Being curious is great, but being curious with the help of an adult will keep us safe while we learn new things.

I enjoyed reading this story to you, and if you have any story requests please email me at hello@storytimewithdad.com.