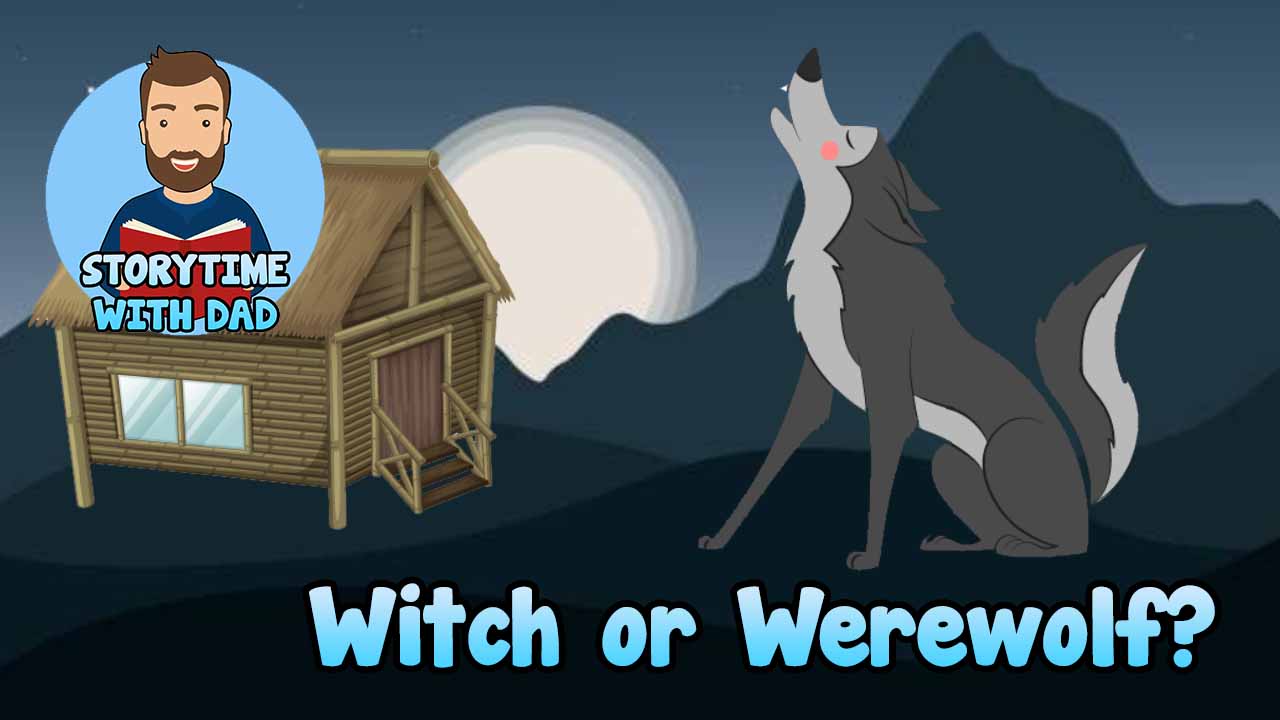 Welcome to Storytime with Dad.  Today we will be reading a scary story: Witch or Werewolf?

All the townsfolk in the small English village of Ashton knew about their strange and mysterious neighbor, Mrs. Prouse and frankly, she made them nervous. She was a big woman with long, messy hair and she had the strangest eyes anyone had ever seen; one eye was green and the other was yellow.

The villagers always wondered about the odd collections of things she kept in her house. Certainly no one else in town had a supply of bat wings, snake eyes, dried toads or bird feathers, to say nothing of the array of odd-looking containers she kept them in. One particularly curious container was a three-handled cup, the likes of which no one in those parts had ever seen before.

Many people admitted that Mrs. Prouse scared them.

Others said that, although the old lady made them a bit jittery, she was just crazy and was nothing to be afraid of.  Everyone agreed though, that if they were troubled about their health, their romances, their crops or anything else that might not be right in their lives then Mrs. Prouse was the person to see. Often, after just one meeting with the old woman, their problems were gone.

Depending on the complaint, Mrs. Prouse might sing a chant as she boiled dried animal bones in a cauldron or she might have the person drink a dreadful tasting tea that she had prepared from some awful smelling powder and served in her curious three handled cup. Whatever remedy she gave them, Mrs. Prouse’s patients soon found their problems had flown away like a witch on a broomstick.

Women often sought her advice because, in spite of her age, Mrs. Prouse’s skin was beautifully, almost unnaturally, smooth and silky as a baby’s. Of course, this quirk only added to the villagers’ uneasiness about what powers she might actually have.

One day, though, the curious folks suddenly forgot their fascination with the strange old lady. That was the day after the first sightings of a mysterious wolf. It wasn’t just the strange animal’s howling that disturbed the people of Ashton, they were used to sleeping through the sounds of wolves baying at the moon. No, this noise was more troubling, louder and definitely sadder.

After only a few nights of the eerie racket, villagers armed with rifles headed out to hunt down the eerie animal.  One of their shots struck the beast’s left leg. When they last saw the wolf, it was whimpering and limping away.

When Mrs. Prouse was seen in town the next day. She was limping badly. Everyone noticed this strange coincidence and by noon the entire village was abuzz with gossip.

The bravest man in town was chosen to ask the old woman why she was favoring her left leg.

“I cut myself while I was chopping wood,” she replied curtly, before using her good leg to drag herself off.

When the eerie baying sounds had not been heard for a number of nights, a small group of curious folk decided to pay a visit to the dilapidated Prouse cottage. The gate to the creepy old place was rusty and screeched loudly in protest when it was opened. Weeds had grown so tall around the house that they almost blocked the front door completely.

Two people held back the tangled overgrowth while a third person pushed open the entrance and stepped inside. The house was empty. Empty of anything alive that is. But the smell of decay always lingers and no combination of rude words could describe the terrible stench that wafted out of the dark and gloomy place.

Filled with equal parts of determination, courage, fear and fascination, the frightened trio went into the rundown old house. Just seconds later, their bravery gone, all three ran to escape. Still, no one could say exactly where the smell came from.

The next day, the three returned. This time they were accompanied by dozens of other villagers, anyone willing to take the terrifying risk of visiting the unnatural place. The group silently approached the gate, each person dreading what he or she was about to see.

But Mrs. Prouse’s house was simply not there. It had disintegrated, its timbers rotted and fallen.

“This land is cursed!” one man cried out.

“It is evil!” shouted another.

“It is haunted!” screamed a third before the villagers fled from the spooky scene.

Years later a newcomer moved onto the abandoned land where the strange old cottage once stood. While cleaning decades’ worth of debris out of an overgrown well on the property, the man came across a skeleton – a very strange skeleton. Some of the bones appeared to be from a dog or a wolf. Others were human. A bullet lay embedded in one leg bone and lying beside the bizarre arrangement of bones, was a strange looking cup – a cup with three handles. The man didn’t touch either the cup or any of the bones but even so the sight filled him with such dread that he fled immediately and settled elsewhere.

To this day, the land on which Mrs. Prouse once lived, lies abandoned; by the living, that is and perhaps that shouldn’t be too surprising. After all, wolves and witches have long been associated with one another. They are called werewolves.

Was Mrs. Prouse a witch? Was she a phantom wolf? Was she a werewolf? Was she the ghost of a wolf that had come back in the form of a spooky old woman? Isn’t it interesting that everyone else who drank out of the three-handled cup found their troubles went away. While Mrs. Prouse’s troubles didn’t.

Today we are unlikely to solve this puzzle, but if you ever see a three-handled cup, it would probably be best not to touch it!

Oh my goodness! So what do you think about that? Was Mrs. Prouse a witch, a werewolf, or just a strange old lady? Who knows!? But that was a spooky tale.

Halloween is coming up and I think stories like this are fun to read this time of year. As long as we all know that werewolves aren’t actually real, and that witches don’t cast spells. Make believe is fun, but we should all know how to tell the difference between what’s make believe and what’s real.

The thing I liked about this story is that although people were afraid, many of them overcame their fear to go investigate the thing that was scaring them the most. Now, it’s dangerous to enter into a broken down old house, but facing your fear will actually help you stop being so scared of something. It’s the fact that you choose the time and place to confront your fears that’s so powerful.

If you’re afraid of spiders, I’m not suggesting you pick one up, but I am saying that you get to choose whether you look at the spider or run away if you see one. The decision is yours, and you are braver than you might think you are.

A few of you have sent me emails, and I always like hearing from you so keep it up and send story requests to: hello@storytimewithdad.com